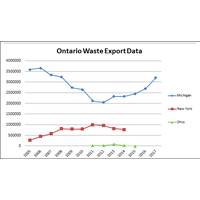 The report found that waste imports into Michigan from Ontario in 2017 increased by 19% over 2016. Since 2012, waste imported into the state from Ontario has risen by 66% to over 3.2 million tonnes. This year over year increase reflects increased export of commercial, construction and demolition waste but a decrease in industrial waste.

The findings of the Michigan Landfill Report reinforce why it’s crucial for Ontario policymakers to carefully consider the movement of waste between jurisdictions before pursuing new policies and regulations related to waste disposal and Ontario landfills that could have an unintended outcome. The waste disposal marketplace on both sides of the border is competitive and 2017 Michigan data may reflect the impacts of both increased cost to Ontario landfills and insufficient domestic landfill capacity in Ontario.

The new data may increase the resolve of Michigan legislators to move forward with increasing the state surcharge on landfilling waste -- from $.36 to $4.75 per ton (approximately $5 CDN per tonne increase) and to revisit other opportunities to reduce the import of foreign waste from Ontario. (see news article here).

OWMA is continuing to monitoring the situation closely. New Ontario waste import data for New York and Ohio have not yet been released, but the table below shows the general trends of all waste shipments into the United States from Ontario. 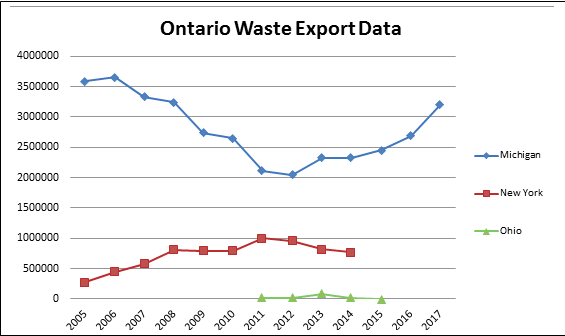